Agave Nectar/Syrup
What: Agave nectar is derived from the Agave plants from Mexico.  The syrup is extracted from the core of this cactus type of plant.  Agave can be found in a light or a dark syrup form.  The lighter syrup has had less heating and a more thorough filtration, resulting in a milder flavour.
Where: It can be found at most major grocery stores, health food stores as well as the Bulk Barn. 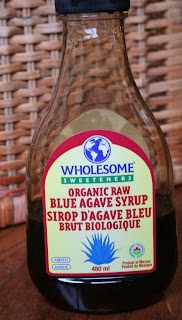 Buckwheat Grouts
What: Buckwheat, although called wheat is actually part of a seed. It is high in protein, B vitamins, phosphorus, calcium, lysine and iron.
Where: It can be purchased at the Bulk Barn or through Bob Red Mills Products.
How to Cook: Boil 1 cup with 2 cups water. To increase its flavour, toast it in a pan for 3-5 minutes with a little oil. 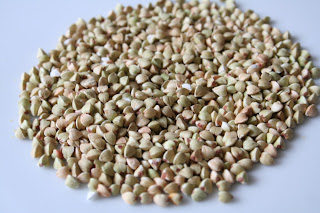 Castile Soap
What: Is a natural soap base made from oil which have been processed (saponified) to create soap.  These oils generally come from various plants, depending on the brand.
I ordered my through New Directions Aromatics http://www.newdirectionsaromatics.ca/liquid-castile-soap-base-p-601.html, however Dr. Bronner's makes another highly recommended soap which can be purchased in many health food stores. 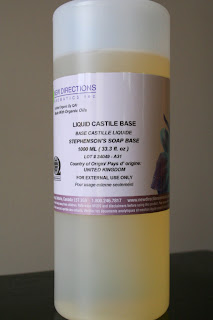 Chia/Salba Seeds
What: The black seeds are called Chia seeds and the white seeds are actually called Salba.  The Salba is higher in protein, omega 3, absorbs more water and are more visually appealing in food preparation.  Both are however, considered a "super food" and are rich in antioxidants, Omega-3, protein, fiber and much more.
Where: They can be found at the Bulk Barn in both bulk and individual packages as well as through Bob Red Mills and any health food store. 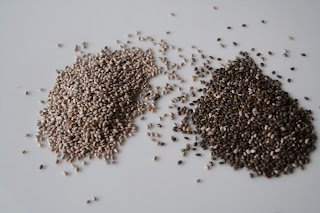 Coconut Sugar and/or Palm Sugar
What: Is considered to be the closest natural, unrefined version of sugar. Palm sugar is collected from the flower bud of a coconut palm tree. It will dissolve the same as sugar but adds an even richer taste.  Palm sugar is low glycemic and rich in nutrients such as potassium, zinc and iron.
Where: Both of these products can be found at the Bulk Barn, health food stores or large grocery stores. 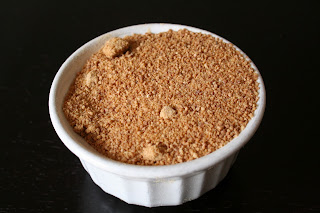 Coconut Vinegar
What: I have recently found this vinegar and really enjoy it.  The best part is that is has no other ingredients. so there is no worry of sulphur or other preservatives.  It doesn't have an overpowering taste and therefore works in many recipes.
Where: I found mine in a local health food store. 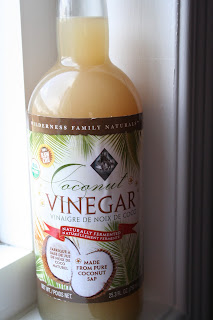 What: I have tried a few cheese alternatives and this one is by far the best.  It melts and stretches just like dairy cheese and will work for pizza, lasagne, quesadillas etc.  I also like this product because is not only dairy free  but also gluten free, soy, nut free and egg free.  There is a mozzarella and cheddar version of this cheese.  It can be found at most major grocery stores.  Daiya cheese of course will never be a complete replacement and you will notice the change in taste but like I said it is the best one out there.
Where: You can find Daiya cheese at the Canadian Superstore, other large grocery stores and many health food stores. 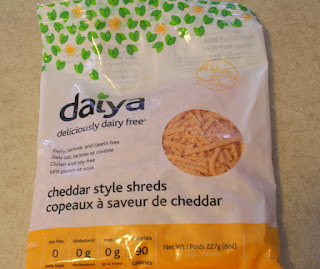 Guar Gum or Xanthan Gum
What: Guar Gum comes from a seed of a bean type plant and is then processed to a white powder.  It is an excellent thickening agent with properties much stronger than corn or potato starch.  Guar gum is high in fibre and may cause intestinal upset
Xanthan gum is a fermented corn based product which is used as a binding agent when no gluten is present.   It is a powdery white substance which when wet become gelatinous.
Note:  Both should be used in limited amounts as too much will create a heavy, gummy texture in your dish.  Personally, I use more guar gum as we try to limit our corn intake.  Guar gum also costs much less than xanthan gum.  The El Peto brand sells both xanthan and guar gum as well as gluten free baking powder.
Where: Both of these products can be found at the Bulk Barn, health food stores or large grocery stores. 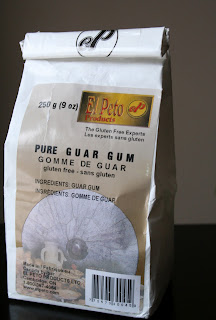 Herbamare
What: Herbamare is an alternative to salt.  It is a combination of sea salt with 14 other organic herbs.  It is very versatile and can be added to soups, sauces, meats and much more.
Where: It can be found at some large chain grocery stores (The Real Canadian Superstore) as well as some Health Food Stores. 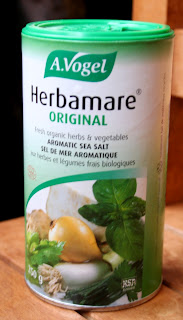 Millet
What: Millet is a small gluten free grain that is an excellent source of magnesium.  Magnesium is important in lowering blood pressure, fighting off migraines and asthma.  Millet is also one of the few more alkaline grains, making it easier to digest.
Where: It can be found at the Bulk Barn however Bob Red Mills has a package as well.
How to Cook: Boil 1 cup with 2 cups water. To increase its flavour, toast it in a pan for 3-5 minutes with a little oil. 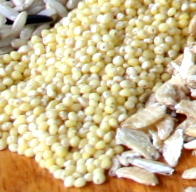 Nutritional Yeast
What: Nutritional yeast is a deactivated yeast found in the same family as edible mushrooms.  This yeast is grown on a mixture of sugar cane and beet molasses. There are no GMOs, sugars or preservatives. It also is not a true yeast and is safe for candida free diets. It has a cheesy, nutty flavour making it a great compliment many other dishes and a favourite among vegans. Nutritional yeast also provides glutathione, iron, zinc thiamine, folate and B-6.

Where: It can be found in the spices section at the Bulk Barn or bought through Bob's Red Mills (finer texture.)  You can also purchase nutritional yeast at most health food stores. 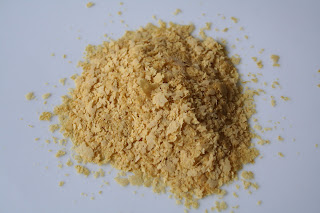 Psyllium Husk Powder
What: A great replacement in gluten free baking instead of xanthan gum or guar gum as it can be easier to digest for most people.  Psyllium husk can also be sold as a colon cleanser.  This product works well to thinken sauces etc. or to bind gluten free ingredients.
Where: It can be found at the Bulk Barn as well as most health food stores 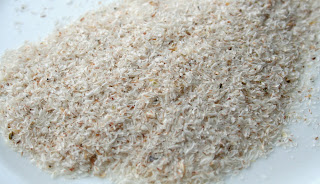 Quinoa
What:  Quinoa is not at grain at all but rather part of the grass family.  It is high in protein and is a great source of magnesium, folate and phosphorus which makes it a great food for migraine sufferers.  Quinoa is gluten free despite rumours of it having a similar protein to gluten that cause digestive problems.   The protein in quinoa is actually called a saponin and is removed in North America.  All this being said, quinoa is safe for celiacs.
Quinoa can come in white, black and red seeds.  Personally I like the red as it has a bit more crunch and crunch.
Where: It can be found at the Bulk Barn however Bob Red Mills has a package as well.
How to Cook: Boil 1 cup with 1.5 cups water. To increase its flavour, toast it in a pan for 3-5 minutes with a little oil. 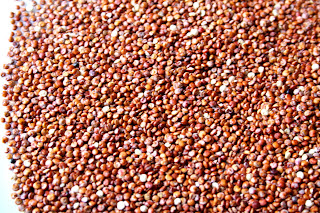 Stevia
What: It is an herb from Paraguay.  It is a natural sweetener which does not contain chemicals.  It has a zero glycemic index which means it does not spike your blood sugar.  Stevia is SUPER concentrated so you need very little in your recipes.  It can come in a powdered form or as a liquid.
Where: It can be found in large grocery stores, the Bulk Barn, and health food stores. 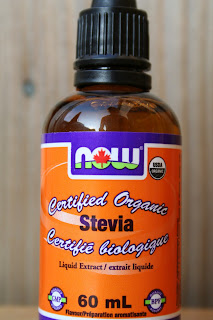 Tea Tree Oil
What: Comes from a small shrub.  It has a strong medicinal and fresh smell.  Tea tree oil has been proven to have antibacterial, anti-fungal and antiviral properties.  It can be used as vapour therapy (colds, flus, viruses) as well as skin/hair repair (acne, dandruff, eczema.)
Where: It can be found in large grocery stores, some drug stores, and health food stores. 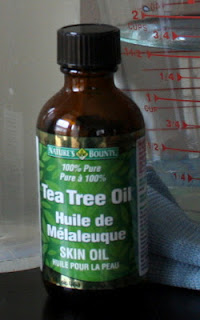 Teff Flour
What: Teff is an Ethiopian grain, high in protein, iron, calcium and fibre.  It is very easy to digest and is a non-gluten grain.
Where: It can be found at the Bulk Barn however Bob Red Mills has a package as well. 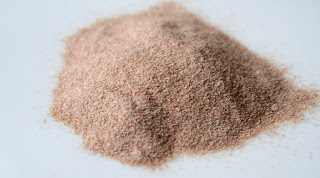 Ume Plum Vinegar
What: A vinegar made from plums.  It is free from preservatives, dyes and chemicals.  Has a lovely sweet taste.  Great for dressings, dips, marinades etc.
Where: Most health food stores.

Vanilla Powder
Certified gluten free and full of flavour.  I use it in most recipes that call for vanilla.  It does have a strong vanilla flavour as it is simply ground beans.  As a note it will make your recipe a darker colour so beware when using in cakes etc.
Where: Found in most health food stores and some larger grocery stores. 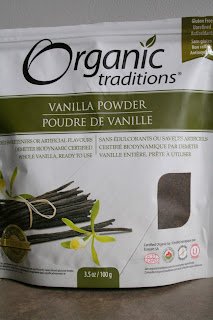 Here are some of the flours I like to use:

White/Brown Rice Flour: I tend to just buy the brown rice instead of the white, as it is a whole grain.  I do believe the white rice is cheaper.  It does absorb moistures so do mix a little less when substituting.  It is a popular flour in gluten free cooking but will add little nutrition.

Tapioca Flour: It is not a grain but rather a root starch.  It is a great binder in recipes as well as a thickener in sauces.

Potato Starch (not flour): This is another great thickener and can withstand a higher heat than corn starch.  It will also help bind ingredients in your recipe.

Sorghum Flour: It comes from the sorghum plant and described as soft and sometimes nutty in taste.  It is a popular substitute and and does well when combined with a starch.  Sorghum will also add some protein to your dish.

Buckwheat Flour:  This is another gluten free flour which is nutty in flavour.  It is work well in pancakes, breads and muffins.

Almond Flour: Not only does this flour add a lovely almond flavour but it is also high in protein and fibre.

Teff Flour: Teff gives a nice rich brown colour to recipes.  It is high in fibre as well as protein and has a lovely nutty taste.

Quinoa Flour: This is a very healthy alternative as it is a whole protein.  I would use this flour in lower quantities as it has a strong taste.

Coconut Flour: Not only does this flour smell delicious but it is also high in fibre.  Coconut flour really absorbs moisture so I would be careful to not add too much.
Arrowroot Starch: This is another awesome thickener.  It is more expensive but has the benefit of almost no taste.  I like to use this one when making homemade ice cream.

Chickpea Flour (garbanzo bean flour):  I like to use this flour for coating food before frying or baking.  It does not have a great taste when raw but does well when cooked.

Promote your Page too